Jamie Foxx’s song “Blame it” encourages blaming alcohol for all ruined relationships, unsafe situations, and perceived enhancement of other’s attractiveness. Outside of the many issues and poor decisions can that can result from a night of boozing, including a high credit card bill, higher risk for accidents, and even a 2am Taco Bell run…there are more. During Covid-19, some are hitting the wine and beer harder.

Let’s review the basics: alcohol interferes with communication between nerve cells and all other cells in the body. Moderation (the amount considered to not contribute to any major health concerns) for the average woman is defined by the CDC as not more than one drink per day and for the average man as not having more than two.

A study published in the Journal of the Academy of Nutrition and Dietetics asserts, “there has been an increase in the proportion of US adults who drink on any given day and an increase in calories consumed from alcoholic beverages when drinking occurs.”

What effect is this having on us from a weight loss perspective? Or a liver-health one?

Now we appreciate the humor some of you bring to our appointments:

“I’m not too concerned. It’s called a liver, not a die-er”

With alcoholic beverages being among the top five contributors to total caloric intake among US adults, this is something we need to talk about. But beyond calories, here are more reasons to explore your relationship with alcohol:

END_OF_DOCUMENT_TOKEN_TO_BE_REPLACED

We recently had the pleasure of educating the public about the top food allergies as well as the difference between gluten intolerance or sensitivity and celiac disease in a segment this past weekend.

The segment aired on Saturday, October 26th on CNBC but you can watch them on the Advancements website and Vimeo. Learn more about this important topic with these additional questions and answers:

Food allergies can cause anaphylactic shock and are a huge concern. The ‘big 8’ allergens in the U.S. are milk and eggs, fish and shellfish, tree nuts and peanuts, wheat and soy. In other countries, including the United Kingdom, they have even more common allergies including lupin, sulfites, and celery.

Q: How does gluten affect a person with celiac disease versus one with a sensitivity or intolerance to gluten?

A: In someone with celiac disease, eating gluten causes the body to attack and destroy the villi in the small intestine, causing nutrient deficiencies and gastrointestinal issues including diarrhea, abdominal pain, bloating, and weight loss. Even skin rashes, lactose intolerance, infertility and bone loss can be symptoms.

For a person with gluten sensitivity, the symptoms can be similar to the ones present with celiac disease minus the damage to the villi of the small intestine.

Q: What are the benefits of a gluten-free diet to those who have celiac disease or gluten sensitivities?

A: Following a lifelong gluten-free diet is imperative and the only treatment (thus far), for those with celiac disease. The good news is that the villi of the small intestine can heal and one can absorb more nutrients, have a decrease or elimination of symptoms, and have a reduced risk for colon cancer.

The benefit of a gluten-free diet to those with gluten sensitivity can be a lessening or even elimination of symptoms including skin rashes, headaches and migraines, bloating, stomach pains, and fatigue.

Q: Who else can benefit from following a gluten-free diet?

A: Some people with autism, eczema, multiple sclerosis, and chronic fatigue syndrome report feeling better when eliminating gluten from their diets. It is possible that they could have a gluten sensitivity and this may help explain why their symptoms improve on a gluten-free diet.

Also, some people have gone on a gluten-free diet as a means for weight loss, but it is not necessary nor recommended.

An estimated 27 million Americans suffer from thyroid disorders; roughly half go undiagnosed. Women are mainly affected. About half of those diagnosed have Hashimoto’s, an auto-immune condition.

The thyroid, from the Greek word thyreos meaning “shield” is a small gland in front part of the neck just above the voice box.

Just because it’s tiny and weighs less than an ounce, does not mean it can’t pack a punch. This little gland is a force to be reckoned with as it can influence your other organs (and vice versa) and your overall health. The thyroid releases hormones that regulate metabolism help control the function of many of your body’s organs, including your heart, brain, liver, kidneys, reproductive system and skin.

What might amaze you is the variety of connections this little networking gland has with seemingly every part of the body. Do you have digestive issues, hair falling out, fatigue, constipation, or struggle to lose weight? Guess what, your thyroid might be the culprit.

Hypothyroidism’s symptoms are often subtle and non-specific (mimicing symptoms associated with other conditions). Sometimes they are attributed to the aging process.

Those with milder forms of hypothyroidism may not have any signs or symptom, but they generally become more obvious as the condition deteriorates.  A slower metabolism, or inability to lose weight, is often a first complaint. Here are more:

Here’s a fairly typical example of what can happen with a client who has thyroid issues: (typically female) she will present during our initial consultation with quite a few symptoms of hypothyroidism but says “my doctor says my TSH is in the normal range.” That’s where we have take a pause and educate about how one problem with only testing TSH is that it is not telling the whole story of thyroid health. The second problem is that the lab range (often based off of sick people) for what is considered ‘normal’ is quite large; the functional range is much smaller. You may benefit from further testing, especially to rule out Hashimoto’s.

A 32-year-old female who was recently diagnosed with celiac disease has had gastro-intestinal issues for years. When ‘gluten-ed’, she suffers immobilizing joint pain making it nearly impossible to get out of bed. She works part-time and ‘muscles-through’ when feeling ill.

Her sleep is erratic, she hasn’t had a menstrual cycle in years, and she has debilitating fatigue at some times and tons of energy other times.

Guess what she was diagnosed with?

Based on her health history and symptoms, we suspected Hashimoto’s. Her doctor ran some lab tests and that’s what they found.

The client’s doctor has her on medication and she, with our work together, she is currently diligently avoiding aggravating foods as well as using addressing dietary deficiencies and lifestyle changes to ameliorate her immune system dysfunction.

Get educated on your thyroid and join about a dozen other smarties coming to tonight’s class.

Already have plans? Consider getting in touch with an Integrative & Functional Dietitian who examine your symptoms and, if necessary, suggest further testing. We will also help support you in dietary and lifestyle changes to support not only your thyroid but your overall health.

Rhabdomyolysis, or “Rhabdo” for short, is the death of muscle cells (rhabdo from Greek meaning “rod”, myo – “of muscles, relating to muscles” and lysis meaning “to break”). When muscle is damaged or strained from work, it releases a protein called myoglobin into the bloodstream. If the levels of the protein get too high, they can cause damage to the kidneys and even cause renal failure.

Though it’s not a new condition, rhabdomyolysis has been recently associated with popular high-intensity workout regimens which typically have participants pushing beyond their limits with extreme power-lifting along with challenging cardiovascular activities. However, there are other different causes including dehydration resulting from drug or alcohol, trauma, heat stroke, medications, and infection.

One of the signs of rhabdomyolysis is dark, red, or brown-colored urine and can be accompanied by fatigue, muscle weakness, fever, and difficulty moving limbs as well as nausea and vomiting.

To help avoid injury during high-intensity exercise, it’s important to have proper training and diet. Whether you’re just beginning an intense workout regimen or have been training for years, every athlete needs to know the risk for rhabdomyolysis.

Remember to never push your body for too long or too hard in exercise as well as to have proper nutrition and fluid intake so you can effectively flush out myoglobins through your urine. 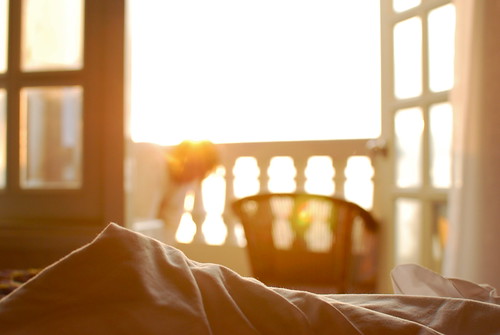 Are you eating a healthy diet and living a healthy lifestyle, but still not feeling your best? If so, check to make sure you’re not skipping out on a crucial wellness component: sleep!

Recent research has shown that getting adequate and good quality sleep may not be enough! The timing of your sleep is more important than you think. Getting 8 hours of sleep starting at 11:30pm is much different than starting your slumber earlier. When you go to bed later than 10pm, you are fighting your natural circadian rhythm. Over time, this can cause hormone imbalances, cravings and fatigue.

When you sleep and wake with the sun’s patterns you are following your internal circadian rhythm. This will leave you feeling refreshed, energized and more rested without spending more time in bed. As you find yourself adjusting your clocks next week, set your alarm to wake up with the sun. You’ll be amazed how your body will respond!